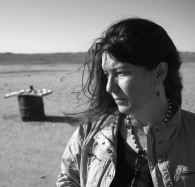 Kristin Capp
Photographer
(1964 - )
www.kristincapp.com
Life: 1964 â Present Hometown: Portland, OR Lives and Works: Windhoek, Namibia Website: www.kristincapp.com Education: McGill University, BA, 1987 About the artist: Born in Portland, Oregon and based out of New York and Namibia, Kristin Capp is a true artist who uses photography to explore and express herself and the world around her. While studying Literature and Languages at McGill University in the late 1980s, Capp discovered photography and found a home in the darkroom. Since then she has travelled extensively to photograph various cultures around the globe. Most recently the winner of a Fulbright Fellowship in Namibia, Capp has won numerous grants, fellowships and awards throughout her career. Similarly, her work has been exhibited worldwide, in both group and solo exhibitions, from San Francisco to Paris to Brazil. Capp has published three monographs thus far in her career and her work is included in numerous permanent collections including the Whitney Museum of American Art, Brooklyn Museum of Art, Seattle Art Museum, Museum of Fine Arts, Houston and Bibliotheque Nationale de France. These images are part of a recent project where Capp travelled throughout Brazil to capture the mood of the emerging nationâs rich and authentic culture. In addition, Capp is in production of a Brasil publication and is in talks with the Brooklyn Museum for an upcoming exhibition of the works. Each print is signed, titled, and dated by the artist and was printed under her direct supervision to the highest archival standards.

Your current search criteria is: Artist is "Kristin Capp".