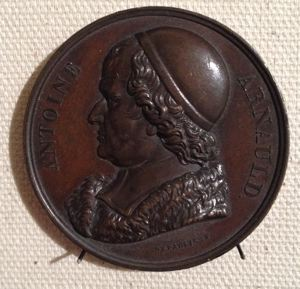 
On the obverse of this medal by Alexis Joseph Depaulis, theologian and philosopher Antoine Arnauld (1612-1694) appears facing left, wearing ecclesiastic garb. Arnauld became a prominent voice of the Catholic dissent movement known as Jansenism in the mid-17th century, and was also a strong critic of the Jesuit order. The medallist, Alexis Joseph Depaulis, added his signature, âDepaulis F[ecit],â below Arnauldâs bust.

medals
Small pieces of metal, usually gold, silver, or bronze and bearing a relief design on one or both sides and having a commemorative purpose; resembling a coin, but not used as a medium of exchange.
Jesuits
public domain
Land owned and controlled by the state or federal government. Also, the status of publications, products, and processes that are not protected under patent or copyright.
Christianity
Refers to the world religion and culture that developed in the first century CE, driven by the teachings of Jesus Christ of Nazareth. Its roots are in the Judaic tradition and the Old Testament. The tenets include a belief in the death and redemptive resurrection of Jesus. The religion incorporates a tradition of faith, ritual, and a form of church authority or leadership.
Women artists
priests
Portfolio List