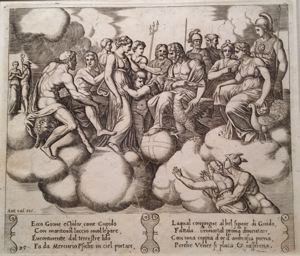 
This engraving formed part of a series of 32 prints telling the story of the god Cupid and the mortal woman, Psyche, with whom he fell in love. In this scene, the lovers, having surpassed many obstacles (chiefly the opposition of Cupidâs mother Venus) appear before Jupiter and the Olympian gods, identifiable by their attributes. Jupiter, swayed by Cupidâs plea, will offer her the ambrosia that will make her immortal. At the lower right appears an earlier moment of the narrative; Mercury brings Psyche to Mount Olympus.

The name of the Master of the Die is unknown, but he seems to have studied with Marcantonio Raimondi, one of the best-known Renaissance engravers. The print is inscribed with the name of the publisher, Antonio Salamanca, at the lower left: âAnt[onio] Sal[amanca] exc[udit].â Below, lines of Italian verse in two blocks explain the scene, drawn from a translation of Apuleius.

Your current search criteria is: Objects is "Cupid and Psyche Plead their Case before the Gods".