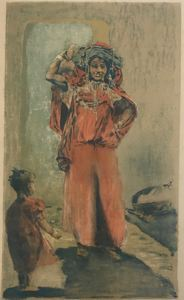 Lunois, who had traveled extensively in Morocco, Tunisia, and Algeria, was a member of the Society of French Orientalist Painters and produced many prints on Orientalist subjects and themes. Depictions of the Middle East was the primary subject matter of these 19th century academic painters.

Your current search criteria is: Objects is "Study: Southern Woman".