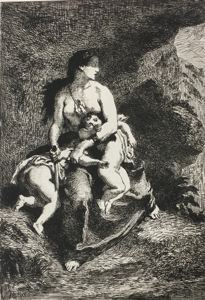 
The publisher Alfred Cadart helped to spur the renewal of interest in etching among French artists. In 1862 he founded the SociÃ©tÃ© des aquafortistes (Society of Etchers), which began to regularly publish work by its members. The Gazette des Beaux-Arts also published etchings, including this reproduction of Delacroixâs successful 1838 painting in the MusÃ©e du Louvre. He depicted Medea preparing to murder her children after discovering the betrayal of her lover, the Greek hero Jason.

Your current search criteria is: Objects is "Medea".