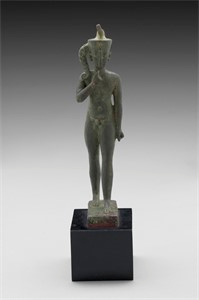 
This statue depicts Horus, the ancient Egyptian god of kingship, as a young child. This iteration of the god became especially popular in the later periods of ancient Egyptian history, as the child Horus began to be associated with healing and protection from venomous animals.

Egyptian Mythology
mythology
figurines
Three-dimensional works that represent humans, animals, or mythical beasts at less than half life-size. While the term may be used interchangeably with "statuette" in certain situations, it differs in that a statuette is always free-standing while a figurine may be part of a larger work, such as a decorative detail on a candelabra or mirror.
devotional images
Images, either two-dimensional pictures or three-dimensional, used in private piety or other religious purposes in a place of worship or home, intended as recipients of prayer or aids to meditation; distinct from images that serve the liturgy or are primarily didactic.
public domain
Land owned and controlled by the state or federal government. Also, the status of publications, products, and processes that are not protected under patent or copyright.
religions
Belief systems that encompass various personal and institutional relationships between human beings and what they regard as holy, sacred, or divine, usually but not always a deity, or a spiritual or occult force. Participation in a religion is typically manifested in obedience, reverence, and worship, often including group activities and alliance with a leader. Elements of a religion or similar belief system include doctrine, ritual, defined parameters of morality, and a code of living, often seen as a means of achieving spiritual or material improvement.
gods
Portfolio List