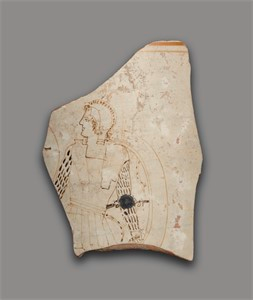 
In Greek mythology, the warrior women known as Amazons were popular in story-telling. Soon they symbolized the historical Persians who also came from the east and fought on horseback. Soon after the Persian Wars of 490 and 480 BCE, images of Amazons appeared frequently on vases, sculpture and in architectural sculpture. The Parthenon on the Acropolis, 447-432 BCE, displays Amazons in battle where they were given prominence across the fourteen west metopes and on the magnificent colossal shield at the side of the gold and ivory statue of Athena inside the temple.
On this vase fragment, an Amazon appears to be in a dangerous moment within a battle. She is equipped with her crested helmet, large heavy round shield, and a corslet protecting her upper body over a long-sleeved under garment decorated with a bold pattern of short vertical lines. From her preserved body position, she would have been running forward to our right, but has stopped to confront an enemy behind her whose shield is partially visible. Her right hand would have held one of her favorite weapons, either an axe or sabre. The fragment isolates this detail and the viewer is left to guess whether or not she will survive the encounter.

Greek Literature
Greek Mythology
mythology
soldiers
vessels
Containers designed to serve as receptacles for a liquid or other substance, usually those of circular section and made of some durable material; especially containers of this nature in domestic use, employed in connection with the preparation or serving of food or drink, and usually of a size suitable for carrying by hand.
warfare
women
public domain
Land owned and controlled by the state or federal government. Also, the status of publications, products, and processes that are not protected under patent or copyright.
militaries
Ancient Greek
Refers to the culture and styles of ancient Greece, generally excluding modern and prehistoric periods, but including periods between around 900 BCE to around 31 BCE. For the culture of Greece in general, including modern Greece, see "Greek."
wars
Portfolio List