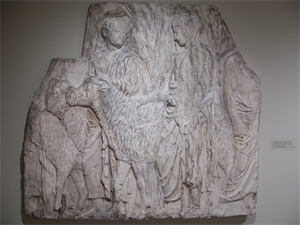 
This scene, from block 4 of the North Frieze, represents events related to the sacrifice for the Panathenaia. A procession of four bulls and four rams being brought to sacrifice appears in the four blocks closest to the east end of the frieze. The depiction is solemn as the procession moves at a stately walk.

Sources tell us that ancient Athenian law required the offering of a ewe to Pandrosus, daughter of Kekrops, the first king of Athens, whenever Athena received a cow. This offering is incorporated into the overall subject of sacrifice within the North (and the South) frieze.