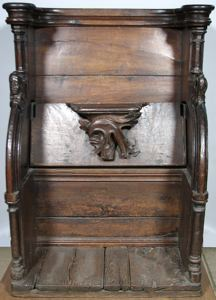 Choir stalls, despite their name, are not associated with music â they were located in the choir area of a church (in front of the altar), where the clergy worshipped. During the Medieval period, priests and monks were required to attend numerous daily masses and prayer services, and had to stand for long periods. The choir stall, also called a misericord, allowed clergy to lean on the shelf under the seat to alleviate the physical stress of being on their feet for such long periods. On the undersides of the shelves, artists carved images that included animals (such as the vegetal ornament here) and dog (as seen on the other choir stall). These carvings would not have been visible to the public. The subjects were usually secular, and may have had allegorical meanings. Dogs are a common symbol of fidelity during this time period, and foliage can represent growth.


Keywords Click a term to view the records with the same keyword
Christianity
Furniture
Religion
Religious Art
Religous Art
Portfolio List Click a portfolio name to view all the objects in that portfolio
This object is a member of the following portfolios:

Your current search criteria is: Objects is "Choir Stall".