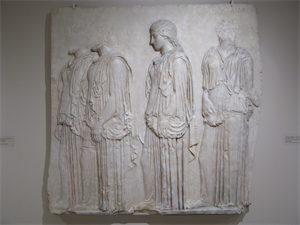 
This section is from the right side of the East Frieze and is part of the procession of maidens walking to the left toward the peplos ceremony. The full panel, which is in the Louvre (Paris), contains four additional figures at left: two maidens between two marshals.

The object being carried by the third figure is a phiale (shallow offering bowl). The women are dressed either in a linen chiton covered by heavy and voluminous himation, or in a woolen peplos with a mantle draped over their shoulders. Some have their long hair tied up in a scarf, while others wear it loose and streaming down their backs. Such distinctions indicate the rank and status of the young women depicted, and their prescribed roles in the ceremony. For example, kanephoroi (or upper-class maidens), who were permitted the honorable task of carrying the ceremonial basket, are identifiable by a chiton with himation and bound hair.