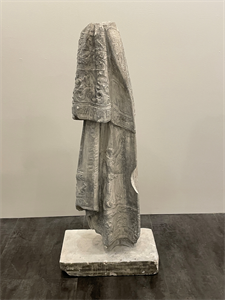 
This cast of a section of drapery is part of an original sculpture called the Colossal Cult Statue Group by Damophon at Lykosoura. In its original form, the sculpture included the two goddesses Despoina and Demeter who sat on a throne flanked by Anytos and Artemis. Behind them was a large altar that had two triton statues as legs. The section shown here is the drapery that would have decorated the altar where animal sacrifices were made to honor Despoina, the patron deity of the local people of Lykosoura. Originally this sculpture was located in the middle of the Temple of Despoina.

The sculpture, created in the 2nd century BCE during the Hellenistic period of Greece, depicts the myth of Despoina and Demeter. The sculptor Damophon was renowned for creating sculptures associated with cult and myth. This kind of representation can be seen in the drapery cast in the collection at Fairfield University. Visual references are made to characters involved in the myth of Despoina and Demeter, such as Poseidon and Zeus. They are represented with eagles and tritons which would have been easily recognized by the people of that time period.


In the photos below, you can see the work featured as part of an installation created by Emily Giovannone'22 for her exhibition "A Conversation with Antiquity & Jeff Koons." Â© Emily Giovannone, 2022.

Male artists
public domain
Land owned and controlled by the state or federal government. Also, the status of publications, products, and processes that are not protected under patent or copyright.
sculpture
Three-dimensional works of art in which images and forms are produced in relief, in intaglio, or in the round. The term refers particularly to art works created by carving or engraving a hard material, by molding or casting a malleable material (which usually then hardens), or by assembling parts to create a three-dimensional object. It is typically used to refer to large or medium-sized objects made of stone, wood, bronze, or another metal. Small objects are typically referred to as "carvings" or another appropriate term. "Sculpture" refers to works that represent tangible beings, objects, or groups of objects, or are abstract works that have defined edges and boundaries and can be measured. As three-dimensional works become more diffused in space or time, or less tangible, use appropriate specific terms, such as "mail art" or "environmental art."
Additional Images