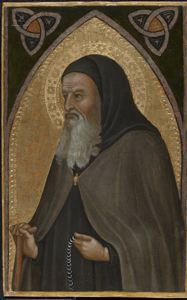 
This panel, and the adjacent painting depicting Saint Andrew, were likely the work of multiple artists, and may have originally formed part of two separate polyptychs, or multi-part altarpieces.

Male artists
monasticism
religions
religious art
paintings
Unique works in which images are formed primarily by the direct application of pigments suspended in oil, water, egg yolk, molten wax, or other liquid, arranged in masses of color, onto a generally two-dimensional surface.
public domain
Land owned and controlled by the state or federal government. Also, the status of publications, products, and processes that are not protected under patent or copyright.
Christianity
Refers to the world religion and culture that developed in the first century CE, driven by the teachings of Jesus Christ of Nazareth. Its roots are in the Judaic tradition and the Old Testament. The tenets include a belief in the death and redemptive resurrection of Jesus. The religion incorporates a tradition of faith, ritual, and a form of church authority or leadership.
Additional Images