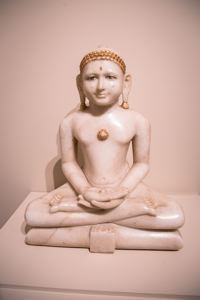 Although this seated figure might appear at first glance to be a depiction of Buddha, it instead represents a similar figure from the Jain religion â a Jina, or one who is victorious over death and has received spiritual knowledge. The religious ideal of Jainism, these figures are also known as Tirthankara, or âFord Crosser,â meaning one who has crossed beyond death. Jains recognize twenty-four Tirthankaras, the last of which lived at about the same time as the Buddha and was part of the same intellectual-spiritual milieu that gave rise to Buddhism.