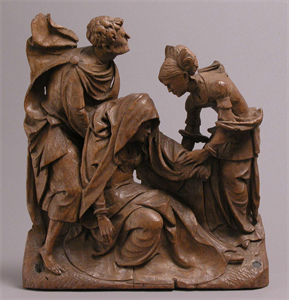 Virgin Fainting at the Cross


Devotional sculptures of this type were common on altars in churches and private homes, where they would have been placed with other scenes (as seen here) to collectively create a story for the viewer and foster contemplation. The principal theme of this type of sculpture was the suffering and sacrifice of Christ for human redemption. The subjects in this case belong to a category known as the Seven Sorrows of the Virgin. In these sculptures, the emotions of the Virgin Mary demonstrate the type of empathetic response that was encouraged for the faithful. By reflecting upon the grief of Christâs mother, the faithful would contemplate the means of Christian redemption. Although these three sculptures from the School of Antwerp are all made of oak and carved in the expressive style known as mannerism, they were likely not made by the same artist or originally displayed together.

The Virgin Fainting at the Cross depicts, from left to right, John the Apostle, the Virgin Mary, and Mary Magdalene at the Crucifixion of Jesus Christ. Maryâs falling action shows her sorrow at the death of her Son. Maryâs compassion was viewed as a form of imitatio Christi, in which she falls as if dying herself.

religious art
statues
Sculpture in the round, usually but not always depicting humans, animals, mythical beings, or small figure groups. Statues are relatively large in scale, being life-size, larger than life-size, or only slightly smaller than life-size. For small-scale representations of humans, animals, or mythical beings, use "figurines," "statuettes," or another appropriate term. For depictions of humans, animals, or mythical beings in media other than sculpture, use "figures (representations)."
Virgin and Child
women and children
devotional images
Images, either two-dimensional pictures or three-dimensional, used in private piety or other religious purposes in a place of worship or home, intended as recipients of prayer or aids to meditation; distinct from images that serve the liturgy or are primarily didactic.
public domain
Land owned and controlled by the state or federal government. Also, the status of publications, products, and processes that are not protected under patent or copyright.
religions
Belief systems that encompass various personal and institutional relationships between human beings and what they regard as holy, sacred, or divine, usually but not always a deity, or a spiritual or occult force. Participation in a religion is typically manifested in obedience, reverence, and worship, often including group activities and alliance with a leader. Elements of a religion or similar belief system include doctrine, ritual, defined parameters of morality, and a code of living, often seen as a means of achieving spiritual or material improvement.
Christianity
Refers to the world religion and culture that developed in the first century CE, driven by the teachings of Jesus Christ of Nazareth. Its roots are in the Judaic tradition and the Old Testament. The tenets include a belief in the death and redemptive resurrection of Jesus. The religion incorporates a tradition of faith, ritual, and a form of church authority or leadership.
Additional Images