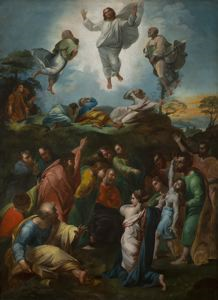 
This painting is a 19th-century copy after a much larger painting by Raphael that is in the Vatican Museums. The composition combines two stories from the Synoptic Gospels (Matthew, Mark, and Luke): at the top, the Transfiguration of Jesus atop Mount Tabor, with the prophets Moses and Elijah appearing to Jesus while the Apostles Peter, James, and John sleep; and below, the story of the remaining Apostles attempting to drive out demons from a possessed boy. Lacking confidence in their abilities, they are unable to perform the miracle, and must wait for Christ to return. Raphaelâs painting was one of the last he worked on before his death in 1520; it was intended to be sent to France, but was instead put on view in the Pantheon and later in San Pietro in Montorio.

Infrared reflectography of the surface revealed extensive underdrawing (including such details as ears and fingernails), all evidently done freehand, without a grid. Chemical analysis of the pigments detected chromium yellow (not produced until the 1810s) as well as Prussian blue (1830s), as well as the poisonous orpiment, made from lead. Orpiment was no longer in use by the 1880s, giving an unusually precise window for the dating of this picture.