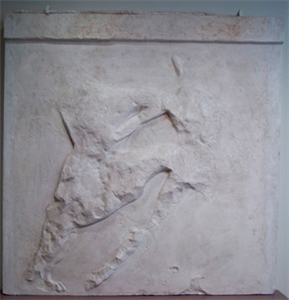 
A theme for the fourteen metopes on the east side of the Parthenon remained obscure until a 19th century scholar recognized Dionysos in East Metope 2. The composition once identified provided the key to our understanding of the entire series as the Olympian Gods fighting Earth-born Giants for supremacy of Mt. Olympus.

This is one of the earliest mythological battles and its placement on the front of the Parthenon was significant because Athena played a major role in the battle and ultimate victory. The Parthenon was a temple dedicated to her. In East 2 Dionysos, at left, strides to the right and attacks a giant dressed as a warrior. A panther leaps alongside and bites the Giantâs torso. A bronze snake, cast separately and attached with nails in the lower half of the metope, also attacks the Giant. This particular composition contains four figures, whereas most of the Parthenon metopes have two figures. The Giant may be running to the right and twisting to escape the animals, but he will not survive.

In the photo below, you can see a graphite on paper drawing showing the metope surface in its current condition (Â© K.A. Schwab, 2005),

Greece
Greek Mythology
mythology
public domain
Land owned and controlled by the state or federal government. Also, the status of publications, products, and processes that are not protected under patent or copyright.
Ancient Greek
Refers to the culture and styles of ancient Greece, generally excluding modern and prehistoric periods, but including periods between around 900 BCE to around 31 BCE. For the culture of Greece in general, including modern Greece, see "Greek."
sculpture
Three-dimensional works of art in which images and forms are produced in relief, in intaglio, or in the round. The term refers particularly to art works created by carving or engraving a hard material, by molding or casting a malleable material (which usually then hardens), or by assembling parts to create a three-dimensional object. It is typically used to refer to large or medium-sized objects made of stone, wood, bronze, or another metal. Small objects are typically referred to as "carvings" or another appropriate term. "Sculpture" refers to works that represent tangible beings, objects, or groups of objects, or are abstract works that have defined edges and boundaries and can be measured. As three-dimensional works become more diffused in space or time, or less tangible, use appropriate specific terms, such as "mail art" or "environmental art."
Additional Images