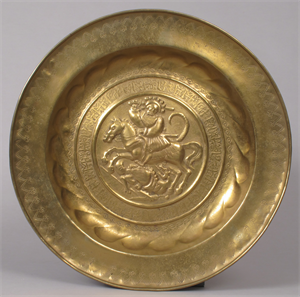 
In Germany and the Southern Netherlands, decorative plates such as these were displayed on sideboards in homes and used in the liturgy in churches; because religious imagery was common in domestic decoration, it is uncertain where these examples were originally located. This plate depicts St. George, an Early Christian Greek warrior saint and martyr, fighting the dragon that he killed, according to a later legend that Crusaders brought to Western Europe. The legend became a popular subject of Medieval romances.

vessels
Containers designed to serve as receptacles for a liquid or other substance, usually those of circular section and made of some durable material; especially containers of this nature in domestic use, employed in connection with the preparation or serving of food or drink, and usually of a size suitable for carrying by hand.
public domain
Land owned and controlled by the state or federal government. Also, the status of publications, products, and processes that are not protected under patent or copyright.
Portfolio List