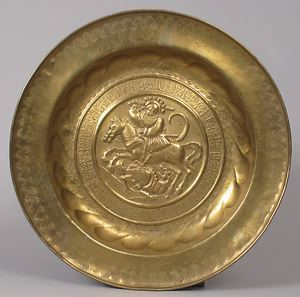 In Germany and the Southern Netherlands, decorative plates such as these were displayed on sideboards in homes and used in the liturgy in churches; because religious imagery was common in domestic decoration, it is uncertain where these examples were originally located. This plate depicts St. George, an Early Christian Greek warrior saint and martyr, fighting the dragon that he killed, according to a later legend that Crusaders brought to Western Europe. The legend became a popular subject of Medieval romances.

Your current search criteria is: Keyword is "SJ".