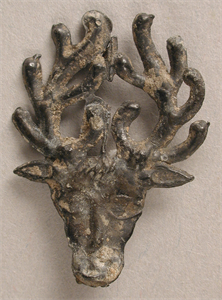 
Originally worn by medieval knights in tournaments, badges were worn on clothing by a rulerâs supporters and dependents. In the fourteenth century, they were widely distributed by kings and lords. The Hart badge was designed for the followers of King Richard II of England (1367â1399). His livery emblem was a white hart, or stag.

kings
badges
Objects bearing special or distinctive marks and worn for decoration or to signify affiliation. Originally, badges were heraldic symbols worn as identifying marks by a knight and his retainers, e.g., a badge of arms. In later use, the term refers to any distinctive device, emblem, or mark worn to indicate a person's affiliation, rank, office, name, or membership in an organization or support for a cause, particularly objects that comprise small pieces of metal, card, plastic, etc., that bear a distinguishing design or words.
royalty
public domain
Land owned and controlled by the state or federal government. Also, the status of publications, products, and processes that are not protected under patent or copyright.
Portfolio List