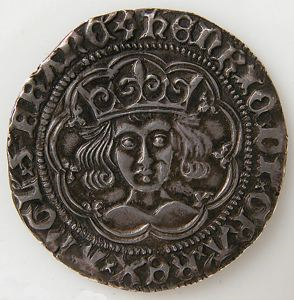 
An obsolete currency today, the groat was worth four British pence. This coin was minted when King Henry VI (1421â1471) was a child. The front of the coin features a bust of the youthful-looking king with flowing hair. The same image was used on Henryâs coinage for the duration of his reign. A religious man, Henry was uninterested in politics and warfare. Later in life, he experienced several bouts of mental illness before recovering during the start of the Wars of the Roses, dynastic battles for the crown between the houses of York and Lancaster. Henry, who supported the House of Lancaster, was imprisoned and murdered in the Tower of London.

Your current search criteria is: Keyword is "TN" and [Objects]Country is "England".