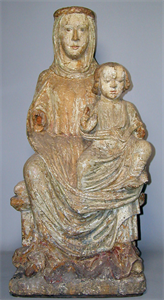 Seated on the Virginâs lap, Christ lifts one hand in a gesture of blessing. His right foot appears caught in the folds of her drapery, a âhighly unusual iconography feature [that] gives almost the effect that the Child is stepping out of His motherâs womb.â (Metropolitan Museum of Art, Notable Acquisitions 1965/1975, 153). The wooden surface, although much damaged, still retains significant traces of its original polychromy.
This statue portrays the common Medieval symbol of Maryâs Throne of Wisdom, and her role as Queen of Heaven. These were important themes during the 13th century, as devotion to Mary increased in the Christian church. The statue belongs to a category called âMajesties,â which are sculptures characterized by a rigid, symmetrical Mary holding an adult-looking Christ child on her lap. These statues were used in religious processions throughout medieval France and the Holy Roman Empire. The lack of jewels and adornments on the statue suggests that it originally belonged to a smaller church, as cathedral versions were often embedded with precious materials. This particular Virgin and Child statue exhibits more lifelike poses than many other examples, showing a transition from the Romanesque period to the more naturalistic Gothic style.

This sculpture formed part of the famous Rothschild collection, which was confiscated by the Nazis in 1938. By the end of World War II, the sculpture was being stored in the Altaussee Salt Mine in Austria alongside other looted works of art. After the war, it was returned to Louis de Rothschild and was later sold by his widow.

Your current search criteria is: Portfolio is "Objects On Loan" and [Objects]Country is "Austria".