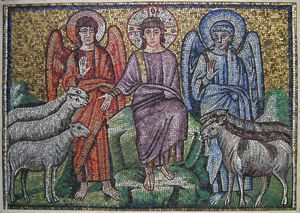 Separation of Sheep and Goats


The parable depicted here, related in Matthew 25:31-46, tells of Christâs second coming and his last judgement of humanity, in which he will place the saved (the sheep) on his right and the damned (the goats) on his left. Typical of early Christian iconography, Christ is depicted as a young and beardless man (unlike other, later representations of him in this museum.) The original mosaic is one of a series of panels depicting episodes from the Gospels, located in the Church of SantâAppolinare Nuovo in Ravenna, Italy. The basilica was constructed by Gothic king Theodoric, an Arian heretic (see the ostrakon on loan from the Metropolitan Museum fo Art from the Metropolitan Museum of Art to learn more about Arianism.)

While a reproduction, this work was nevertheless produced in a similar manner to the original mosaic. Cubes of glass (tesserae), colored by metals such as copper, cobalt, and gold, were organized within outlines to make images.

religious art
public domain
Land owned and controlled by the state or federal government. Also, the status of publications, products, and processes that are not protected under patent or copyright.
architectural elements
Forms, structural or decorative, developed originally or primarily as components of architecture, often adapted to other habitable spaces, such as in large vehicles, and often borrowed or imitated for structural or decorative use on other objects.
religious imagery
Christianity
Refers to the world religion and culture that developed in the first century CE, driven by the teachings of Jesus Christ of Nazareth. Its roots are in the Judaic tradition and the Old Testament. The tenets include a belief in the death and redemptive resurrection of Jesus. The religion incorporates a tradition of faith, ritual, and a form of church authority or leadership.
Portfolio List