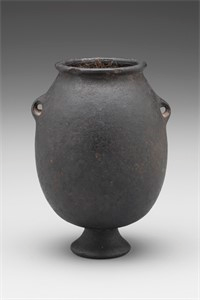 
This object dates to the Predynastic period of ancient Egyptian history before the unification of the northern and southern regions into a single country. There is a large body of artifacts from this time period, often found in ancient cemeteries, from which archaeologists can draw conclusions of the Egyptiansâ daily lives and cultural practices. Indeed, especially by the Naqada II period (the second of three subsections of the Predynastic era), Egyptiansâ stonework had greatly advanced, and they began using materials other than clay for their containers, such as the basalt of this vase. Stone vases such as this vessel are among the rarer
vessels found in Upper Egypt (or southern Egypt), yet were common in Lower Egypt (or northern Egypt). In fact, there is much evidence that stoneware such as the vase in question were made in Lower Egypt and traded in Upper Egypt through routes along the Nile

Given that many ancient Egyptian artifacts, especially vases, are found in tombs, it is likely that this footed vase was a grave good. They strongly believed that the spirit lived after the death of the body, but that the afterlife would closely resemble the world of the living
Because of this burials contained a large number of funerary goods. These items included amulets, cosmetics, clothing, toys, cherished possessions, and food offerings, among others. This footed vase likely held oil, or some other type of liquid for the use of the deceased in the afterlife.

Your current search criteria is: Portfolio is "Objects On Loan" and [Objects]Period is "Naqada I".