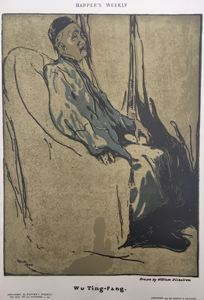 
A Chinese diplomat and politician, Wu Ting-Fang (1842-1922) earned a law degree from University College London and was the first ethnically Chinese person to be admitted to the U.K. bar. He served as the Qing Dynasty's Minister to the United States, Spain, and Peru from 1896 to 1902 and again from 1907 to 1909. In 1914, he wrote an account of his time in the U.S. in English as America, Through the Spectacles of an Oriental Diplomat. Nicholson's color woodcut appeared as a full-color supplement in the American periodical Harper's Weekly.