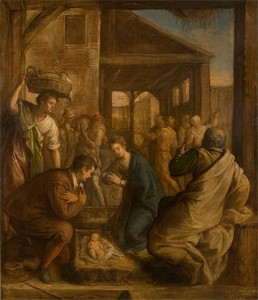 
Fiammingoâs birth name was Pauwels Franck, but he is better known today by his Italian nickname, which translates to âPaul the Fleming.â By 1573, Fiammingo was in Venice working in the studio of Jacopo Tintoretto as a specialist in landscape painting. His Nativity takes place in a bustling village, attended by witnesses in contemporary 16th-century dress, an unusual setting that reflects the artistâs Flemish background (Flemish artists were known for their interest in the realism of daily life). The handling of paint, in contrast, shows the influence of Fiammingoâs Venetian training â the infant Jesus is painted with such loose, painterly strokes that he appears to dissolve upon close inspection.

[1] This may refer to Count Grigory Sergeievich Stroganoff [1829-1910] whose collection was housed in a palazzo in Rome. After his death the collection was dispersed and Contini Bonacossi acquired a number of paintings that were ultimately sold to Kress. This picture, however, is not included in Pieces de choix de la collection du Comte Gregoire Stroganoff Ã  Rome, 2 vols, Rome, 1911-1912.