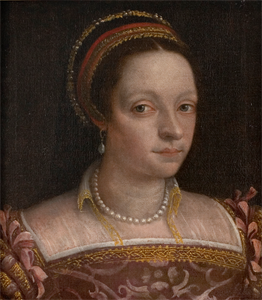 Portrait of a Lady

The identity of the young woman in this portrait is unknown, but based on her attire, scholars believe she lived in France in the mid-16th century. Her headdress is ornamented with gold thread and pearls and her dark hair falls down her back, following a fashion popular in the French and English courts at that time. Her red brocade dress, with its elaborate sleeves and gold embroidery, appears to be Italian in style, but it was common for fashionable women in European courts to follow Italian styles of dress. Her pearl earrings and necklace also suggest her wealth and status.