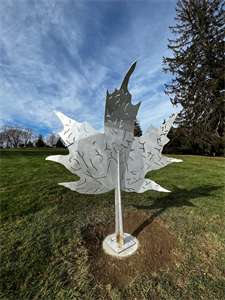 The leaves which have appeared on the Bellarmine lawn are on loan to the Fairfield University Art Museum for the next year from the American artist Alan Sonfist (b. 1946), best known as a pioneer of the Land or Earth Art movement. These four larger-than-life aluminum sculptures of leaves comprise the artwork entitled âThe Endangered Species of New England,â and were created in 2011. They represent several of New Englandâs most beloved native trees: the American Beech, the American Chestnut, the Burr Oak, and the Sugar Maple. The sculpted leaves act as reminders to honor and protect the trees, and as a warning that failure to do so could result in their extinction.

The museum is working with the Biology Department, the Environmental Studies Program and the artist, around a series of programs to be presented in the spring to highlight these sculptures, climate change, and endangered species.

Your current search criteria is: Portfolio is "On Loan from Artists".