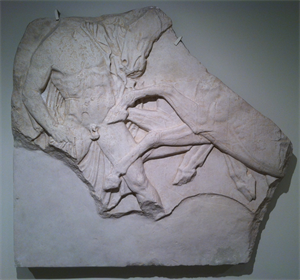 
This part of the Parthenon frieze depicts an apobatÃªs ('dismounter'), a fully armed warrior who rode on a chariot, standing beside the charioteer, and leaped off and on, according to the exigencies of the fight, while the chariot was in motion.