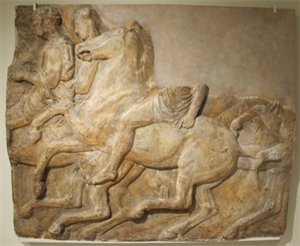 
The Riders are the most widely recognizable sculptures from the Parthenonâs frieze, in large measure because they are perhaps the best preserved sculptures in the entire ensemble. They are also remarkable for their embodiment of the Classical ideal of both man and horse.

The action on the North Frieze, as in this example, shows the cavalcade in full motion. Subtle overlapping defines groups which we now know are rows of riders. The sculptors brought the row forward to fill one or two blocks within the frieze, in part because they did not yet know how to show six or eight riders receding directly into the distance (an innovation that would be discovered in the Hellenistic period).

Each rider is expressive in a unique and individual way. Here, for instance, one is seen holding the reins low in his left hand, while another extends his right arm, as if to caress his horse gently between its ears. Horses tug at the bit, shake their heads, flicker their ears, arch or extend their necks in a variety of ways to convey their nervous energy within the procession. Remarkably, the sculptors and designers never repeated the same horse or rider within the entire frieze.