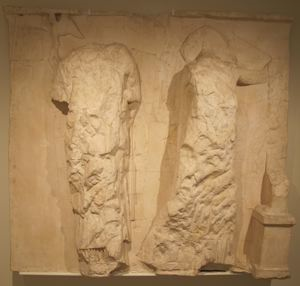 
This metope forms a pair with North Metope 24 to describe an episode in the Sacking of Troy when Menelaos races through the city in ruins to find and kill his wife Helen. He blamed her for the deaths of his comrades and the devastation of the Trojan War. Menelaos was fully armed and surely a terrifying vision of rage. The formidable powers of Aphrodite and Eros transformed the warrior who sees his wife anew and falls in love with her again. Helen takes no chances and runs to a statue of Athena for safety and sanctuary. It was presumed she would be safe as long as she touched the statue. Eventually, Menelaos and Helen are reunited and return to Sparta. A Greek vase in the Vatican collections shows a nearly identical scene and it dates to around the time of the Parthenon. Importantly, the figures are labeled on the vase and this provided crucial evidence in identifying the two metopes and served as the key to the theme of the entire metope series on the north side of the Parthenon.

Greece
Athens
Was an ancient metropolis of great importance; settled in Neolithic times. Acropolis was fortified by 1200 BCE; became great city-state, ruling and colonizing over a wide area. It was the center of culture influencing all of the Western world in philosophy, theater, and art. The name refers to the goddess Athena. In Homeric Greek the city's name was in the singular form (á¼Î¸Î®Î½Î·) then changed in the plural.
Athena
Greek Mythology
mythology
public domain
Land owned and controlled by the state or federal government. Also, the status of publications, products, and processes that are not protected under patent or copyright.
Ancient Greek
Refers to the culture and styles of ancient Greece, generally excluding modern and prehistoric periods, but including periods between around 900 BCE to around 31 BCE. For the culture of Greece in general, including modern Greece, see "Greek."
sculpture
Three-dimensional works of art in which images and forms are produced in relief, in intaglio, or in the round. The term refers particularly to art works created by carving or engraving a hard material, by molding or casting a malleable material (which usually then hardens), or by assembling parts to create a three-dimensional object. It is typically used to refer to large or medium-sized objects made of stone, wood, bronze, or another metal. Small objects are typically referred to as "carvings" or another appropriate term. "Sculpture" refers to works that represent tangible beings, objects, or groups of objects, or are abstract works that have defined edges and boundaries and can be measured. As three-dimensional works become more diffused in space or time, or less tangible, use appropriate specific terms, such as "mail art" or "environmental art."
Additional Images