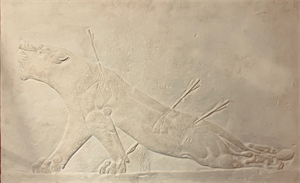 Cast of the original in the British Museum, London


This cast is taken from a scene that is part of a series of reliefs from the palace of King Ashurbanipal in Ninevah in modern-day Iraq. This series depicts a royal hunt that took place within a hunting park near the North Palace. Scenes depicting kings hunting lions were important symbols of political power in the Assyrian Empire, demonstrating a king's ability to protect his people from both natural enemies as well as the chaotic supernatural forces they represent.

You can see images of the original relief on the British Museum's website here . To learn more about lion hunting in the ancient Near East, you can read this essay

Assyrian
Refers to the period roughly from the beginning of the 2nd millennium BCE, when Assyrian rulers first appeared in northern Mesopotamia and continuing until the fall of their empire in 612 BCE.
Near Eastern
Refers to the culture that developed in antiquity in the vast geographical area extending from Turkey in the west to Iran in the East.
public domain
Land owned and controlled by the state or federal government. Also, the status of publications, products, and processes that are not protected under patent or copyright.
sculpture
Three-dimensional works of art in which images and forms are produced in relief, in intaglio, or in the round. The term refers particularly to art works created by carving or engraving a hard material, by molding or casting a malleable material (which usually then hardens), or by assembling parts to create a three-dimensional object. It is typically used to refer to large or medium-sized objects made of stone, wood, bronze, or another metal. Small objects are typically referred to as "carvings" or another appropriate term. "Sculpture" refers to works that represent tangible beings, objects, or groups of objects, or are abstract works that have defined edges and boundaries and can be measured. As three-dimensional works become more diffused in space or time, or less tangible, use appropriate specific terms, such as "mail art" or "environmental art."
Portfolio List