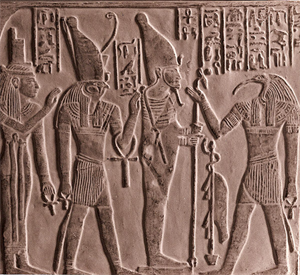 This replica from the Caproni Collection is noted in the antique P.P. Caproni and Brother catalogs as being in the collection of the Louvre Museum. This frieze shows four ancient Egyptian deities. Three of the four, Isis ( ê£st), Horus (á¸¥r.w) and Osiris (wsjr), form a triad or a familial grouping of gods common in Egyptian mythology. These three deities have strong associations with Egyptian kingship as Osiris was believed to be the first mythological king of Egypt. However, Osiris was murdered by his broth Seth (stáº ), the god of chaos, in an attempt to steal the throne. Isis, Osiris's wife and the goddess of magic (among other responsibilities) was able to mummifify her husband, enabling him to be reborn into the underworld. Their son Horus ultimately avenged his father's murder and secured his right to the throne of Egypt after defeating Seth in a series of challenges culminating in a court trial overseen by a group of nine gods known as the Ennead.

At the far left is the goddess Isis, recongizable by the hieroglyph on her headdress which makes up part of her name. She is shown wearing a typical ancient Egyptian sheath-dress and holding an ankh (ê¤ná¸«), the hieroglyph for the word "life". Next to her is her son Horus, who is shown as a human male with the head of a falcon. Horus wears the double crown and uraeus cobra, indicating his role as the god of kingship, and has a large ankh on his arm. Beside him is Osiris, traditionally depicted as a mummy, emphasizing his association with death and rebirth. Here he can be seen wearing a long burial shroud, the white crown and uraeus cobra, and the curling false beard worn typically by both gods and deceased kings. He is holding a was ( wê£s) scepter, which symbolized both the power of the king as well as acted to protect the bodies of deceased individuals. To the far right is the god Thoth, who is shown as a human male with the head of an ibis bird. Thoth (á¸á¸¥wty ) was a god associated with scribes, writing, and the calendar. He also played an important role in funerary mythology, recording the deeds of of a deceased person during the "Weighing of the Heart" ceremony, which would determine whether they would be permitted to enter into the afterlife.


Keywords Click a term to view the records with the same keyword
Egyptian Mythology
Egypt
ancient Egypt
Egyptian
teaching collection
Portfolio List Click a portfolio name to view all the objects in that portfolio
This object is a member of the following portfolios: