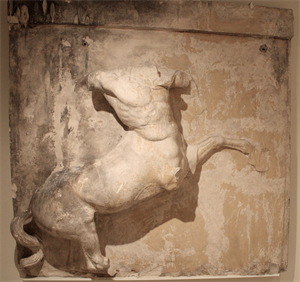 
The Parthenonâs Doric frieze originally had a total of 92 carved metopes, which was unusual for a temple of the Doric order. All four sides depicted mythological battles, which required the sculptors and designers to invent new compositions to fill the many marble panels. The earliest battle appears in the east metopes where the Olympian Gods fight the earth-born Giants. Moving in temporal progression, the south metopes show Lapiths fighting Centaurs at a Wedding Feast. The west series, with Amazons fighting Greeks (possibly Athenians), alludes powerfully to the Persian Wars. In contrast, the north metopes provide an account of the Sacking of Troy, a legend that perhaps has now achieved comparable status with the other great mythological battles.

The fullest account of the battle between the Lapiths and Centaurs at the Wedding Feast is recorded by the 1st-century poet Ovid, in his Metamorphoses. Here we read that Pirithous, the Lapith King, invited his neighbors, the centaurs, to his wedding with Hippodame. The half-man, half-horse creatures, emboldened by drink, assaulted the women of the wedding party including the bride. The Lapiths leapt up from their dining couches to rescue the women and to attack the Centaurs.

A violent skirmish between a Lapith and a centaur is depicted here. The latterâs body creates an almost perfect diagonal line through his rearing pose, as he kicks his forelegs wildly in the air. The centaur wears a cape, and his muscles are well-defined; his body is tense and ready to attack.

Today only the centaur is seen on the metope, but 17th-century drawings of the Parthenon metopes (attributed to Jacques Carrey) make apparent that the centaur was battling a standing Lapith youth, whose wrist can be seen pushing against the bearded chin of the centaur.

Your current search criteria is: Portfolio is "Plaster Cast Collection" and [Objects]Object Type is "Relief Sculpture" and [Objects]Period is "Greek High Classical".