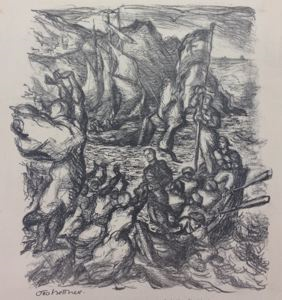 Survivors of the Emden Landing in Hodeida, from the periodical "Kriegszeit. KÃ¼nstlerflugblÃ¤tter" (no. 26, February 10, 1915)


The cover of this issue shows German survivors from the cruiser Emden, which had been beached and disabled by the Australian cruiser Sydney in a naval skirmish in the Indian Ocean on November 8, 1914. Sixty-five issues of Kriegszeit were published between August 1914 and March 1916, by which time public enthusiasm for the war had waned; Cassirer then stopped publishing Kriegszeit and replaced it with the politically neutral periodical Der Bildermann (The Picture-Man).

Male artists
soldiers
prints
Pictorial works produced by transferring images by means of a matrix such as a plate, block, or screen, using any of various printing processes. When emphasizing the individual printed image, use "impressions." Avoid the controversial expression "original prints," except in reference to discussions of the expression's use. If prints are neither "reproductive prints" nor "popular prints," use the simple term "prints." With regard to photographs, prefer "photographic prints"; for types of reproductions of technical drawings and documents, see terms found under "reprographic copies."
warfare
public domain
Land owned and controlled by the state or federal government. Also, the status of publications, products, and processes that are not protected under patent or copyright.
black and white
Portfolio List