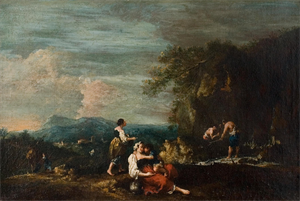 
This type of whimsical painting, featuring peasants depicted amid a tranquil natural setting, was popular among elite audiences in the 18th century. The seated woman in the foreground appears to be about to nurse the young child climbing on her lap. Behind her, a woman with her skirts tied up around her calves walks toward a pair of men standing near the outcropping at the right; the men, stripped to the waist, are fishing in the small stream. On the left, two figures with their backs to the group head toward the town visible in the distance.

landscapes
Male artists
paintings
Unique works in which images are formed primarily by the direct application of pigments suspended in oil, water, egg yolk, molten wax, or other liquid, arranged in masses of color, onto a generally two-dimensional surface.
public domain
Land owned and controlled by the state or federal government. Also, the status of publications, products, and processes that are not protected under patent or copyright.
Portfolio List