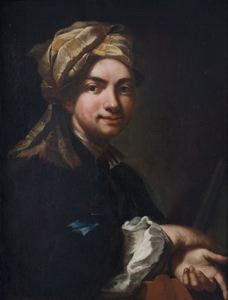 
This painting of a young man in a fanciful turban was previously attributed to the Italian painter Fra Vittore Ghislandi, but has since been identified as a self-portrait of the Dutch-Swedish artist Martin van Meytens II. The son of a painter, Meytens traveled through Europe and spent several years in Italy before moving to Vienna in 1730, where he enjoyed great popularity and later became the de facto court painter to the Hapsburgs.

Meytens painted numerous self-portraits over the course of his long career, and his distinctive features â the round face with its protruding brow line and slightly bulbous nose â are identifiable in each. Many of these self-portraits exist in multiple versions. Another version of Fairfieldâs painting can be found in the Uffizi, where it was formerly part of the Vasarian Corridor of self-portraits.

Your current search criteria is: Portfolio is "On View in Bellarmine Hall" and [Objects]Century is "18th century" and [Objects]Object Type is "Painting" and [Objects]Display Artist is "Martin van Meytens the Younger".