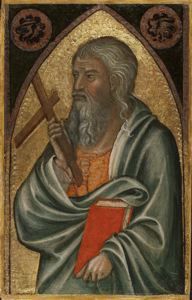 
This panel, and the adjacent painting depicting Saint Anthony Abbot, were likely the work of multiple artists, and may have originally formed part of two separate polyptychs, or multi-part altarpieces.

Your current search criteria is: Portfolio is "On View in Bellarmine Hall" and [Objects]Display Artist is "Bartolommeo Bulgarini".