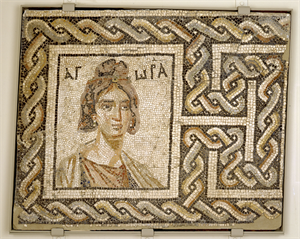 Personification of Agora (Abundance of the Marketplace)


This is a fragment of a larger mosaic floor measuring about 13 by 9 feet, which was discovered in a necropolis outside the Syrian city of Antioch, which played a key role in the ancient Mediterranean world. This piece of the mosaic formed part of a decorative border around a center scene depicting an all-female funerary banquet. She is identified in Greek letters as Agora, or the spirit of the marketplace, and was matched by another female personification of Eukarpia, or Fertility.

Funerary banquets were a regular feature of late-antique Roman life, as the living returned to the necropolis to hold feasts in honor of the dead. This floor is unusual for its female subjects; it has been suggested that the women depicted in the central scene may have been part of a business association. A kinship relationship is another possibility.

Roman
Refers broadly to the period, styles, and culture of the state centered on the city of Rome from the period from the founding of the city ca. 700 BCE through the events leading to the founding of the republic in 509 BCE, the establishment of the empire in 27 BCE, and the final eclipse of the Empire of the West in the 5th century CE. Ancient Rome became a powerful force and supplanted Greek and Etruscan influence on the Apennine peninsula. Its rule and influence gradually encompassed a wide area in Europe, northern Africa, the Middle East, and Asia Minor. Its influence was wide in scope, including sculpture, painting, architecture, engineering, language, the road system, law, and many other areas of culture. Roman art and architecture is characterized by early derivations from Greek art and architecture, but it gradually developed into a style of its own, absorbing characteristics of styles from the far flung regions under its control.
funerary art
women
architectural elements
Forms, structural or decorative, developed originally or primarily as components of architecture, often adapted to other habitable spaces, such as in large vehicles, and often borrowed or imitated for structural or decorative use on other objects.
Antioch
Ruins of a Greek city, near the modern city of the same name, Antakya; a prehistoric settlement called Meroe was located at what was later the eastern suburb of ancient Antioch. Antioch itself was established as a Greek city ca. 300 BCE by Seleucus I; quickly became principal Greek outpost in Asia. Was the Early Christian base of St. Paul ca. 47-55 CE; part of Arab caliphate from 637; returned to Byzantine Empire 969; then ruled by Seljuq Turks (1084), Crusaders (1098), and Mamluks (1268); has been repeatedly destroyed by earthquakes, and rebuilt.
agoras
In ancient Greek settlements, open spaces used as marketplaces or general public meeting places. For similar spaces in ancient Roman settlements, use "forums."
Additional Images