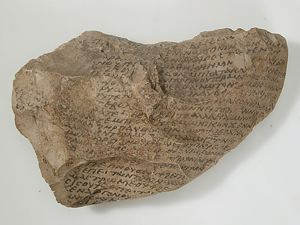 Ostrakon with a Homily by Athanasius

Ostraka (pl.) are pieces of rock, pottery, or bone that feature writing. Limestone, as used for this ostrakon, was popular during the Early Christian period in Egypt as a readily available alternative to papyrus, which was more expensive and more difficult to obtain. The inscription, a homily by Saint Athanasius, is written in the Coptic language. This ostrakon likely had its origins in a monastery where it was used for educational purposes of practicing writing and learning theology. The ostrakon is from a period when Egypt played a central role in Christianity. Saint Athanasius was a fourth-century Bishop of Alexandria and theologian known for his role in defining Christian teaching. He was a strong opponent of Arianism, a belief (declared heretical) that denied the Trinity by asserting that the son of God was lesser than the Father. Athanasius was part of the council that wrote the Nicene Creed, asserting the consubstantiality of the Father, Son, and Holy Spirit.


Keywords Click a term to view the records with the same keyword
Middle East
Theme: Communicating Spiritual Beliefs - Pilotti
Christianity
Religion
Africa
Egypt
African
Egyptian
ostrakon
Coptic
Portfolio List Click a portfolio name to view all the objects in that portfolio
This object is a member of the following portfolios:

Your current search criteria is: Portfolio is "On View in Bellarmine Hall" and [Objects]Object Type is "Utilitarian Object" and [Objects]Country is "Egypt".