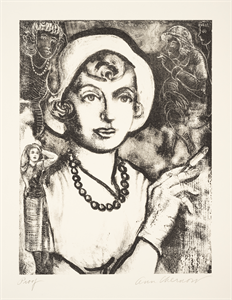 
This print was made as a collaboration between Ann Chernow and Jim Reed. Ann wanted to experiment with re-creating the surfaces of Pablo Picasso's prints. As the artist herself described:
"I wanted my own prints to attain the unique surfaces and dramatic qualities of certain Picasso prints. I had worked with Jim Reed for years in his Milestone Graphics print studio in Bridgeport, CT, and we approached this new project as a collaboration between artist and printer.

Picasso created several lithographs on zinc. The only information noted for Picasso's The Italian Woman read: âzinc re-engraved in the backgroundâ, and this lack of detail presented multiple problems. I had never worked on a zinc lithograph, and the phrase, âre-engraved in the backgroundâ had to be recreated by erasing some areas that had already become an essential part of the work. The usual liquid Jim âerasedâ with, was no longer available in the U.S.A. A mutual friend in Paris searched all the art material stores there and learned that the substance was no longer produced, probably because its content is now considered hazardous. When we were âstuckâ on how to proceed, Jim said, âgive me three weeks.â Within a month, he had purchased many chemicals at Home Depot, and had experimented until he finally, literally had cooked up a gummy and horrible smelling substance which he instructed me not to dare breathe in. I tried it on the plate and it worked perfectly. My corresponding work was The American."