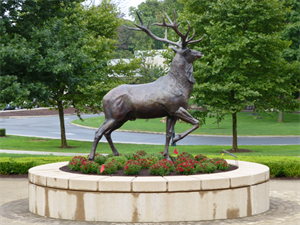 This monumental sculpture of the Fairfield stag was designed by J. C. Dye, a sculptor known for large-scale bronze sculptures of horses and wildlife inspired by his background as a working rancher and outdoorsman. The stagâs powerful body is depicted with a striking level of naturalism; its raised front leg gives the illusion of sudden movement.

For more information about this piece, as well as the other sculpture that you can find around the Fairfield University campus, see ourOutdoor Sculpture Audio Guide on Cuseum here.

Your current search criteria is: Portfolio is "United States" and [Objects]Object Type is "Sculpture".