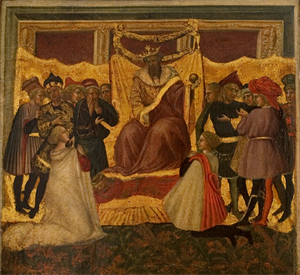 
This panel originally formed part of the decoration of a cassone, or wedding chest. These pieces of furniture, usually found in pairs, were an important part of a brideâs wedding trousseau in 14th- and 15th-century Italy. While these chests were owned by families at all income levels, wealthier patrons could afford cassoni with elaborate decoration, sometimes with paintings by well-known artists. Very few of these chests have survived intact; another, larger panel from this cassone is in the Philadelphia Museum of Art.
Paintings on cassoni often depicted subjects from mythology or literature that related to love and early modern ideals of female behavior. This panel may represent a scene from a popular contemporary novella, but no one has yet identified the source.

Male artists
furniture
paintings
Unique works in which images are formed primarily by the direct application of pigments suspended in oil, water, egg yolk, molten wax, or other liquid, arranged in masses of color, onto a generally two-dimensional surface.
public domain
Land owned and controlled by the state or federal government. Also, the status of publications, products, and processes that are not protected under patent or copyright.
Additional Images