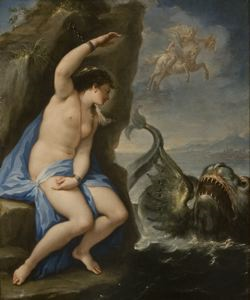 
A beautiful princess, chained to a rock, watches as a sea monster approaches â only the sudden arrival of a hero on a flying horse will spare her from being devoured. According to the Greek myth, Andromeda was offered in sacrifice appease to Poseidon, god of the sea, after her parents praised her beauty above that of his offspring. Perseus, brandishing the severed head of the Gorgon Medusa, happened upon the scene by chance. Taking pity on her beauty, he swooped in â quite literally â to save the day. The subject, best known from the Renaissance onward through the retelling by the Roman poet Ovid, was a popular one among patrons and artists. Paolo de Matteis, who was one of the most prominent painters in southern Italy in the late 17th and early 18th centuries, painted at least two other versions; this one was commissioned by the Buonaccorsi family for their palace in Macerata.

Male artists
Greek Mythology
paintings
Unique works in which images are formed primarily by the direct application of pigments suspended in oil, water, egg yolk, molten wax, or other liquid, arranged in masses of color, onto a generally two-dimensional surface.
public domain
Land owned and controlled by the state or federal government. Also, the status of publications, products, and processes that are not protected under patent or copyright.
Additional Images