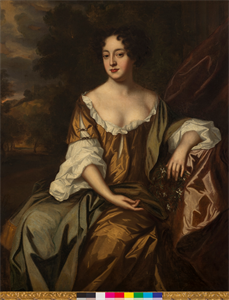 
One of Englandâs most sought-after portraitists, the Dutch painter Willem Wissing frequently re-used variants of the same poses for his sitters. The pose of this woman â who may be Anna Maria Talbot, Countess of Shrewsbury and a famous beauty â is similar to a number of the artistâs other female portraits, including the Portrait of a Woman in the Metropolitan Museum of Art. The two sitters appear, in fact, to be wearing the same elegant garment (albeit in different colors), which may signal the contribution of Jan van der Vaart, a drapery painter who often worked with Wissing.

England
Male artists
portraits
paintings
Unique works in which images are formed primarily by the direct application of pigments suspended in oil, water, egg yolk, molten wax, or other liquid, arranged in masses of color, onto a generally two-dimensional surface.
wealth
public domain
Land owned and controlled by the state or federal government. Also, the status of publications, products, and processes that are not protected under patent or copyright.
seventeenth century
Century in the proleptic Gregorian calendar including the years 1600 to 1699 (or 1601 to 1700).
Portfolio List