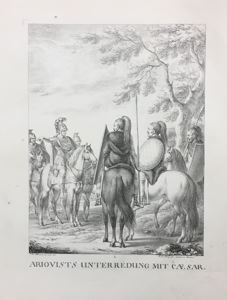 The inscription on the lower right of this early lithograph indicates that it was made at a competing lithographic press in Senefelderâs home city of Munich, indicating that he did not maintain a monopoly on the new technology for long. The printâs subject is the encounter between Julius Caesar and the Gallic chieftain Ariovistus, which was related in the first book of Caesarâs Gallic Wars. Mettenleiter likely chose the subject for its potential popularity with a German audience.


Keywords Click a term to view the records with the same keyword
Europe
Germany
19th Century
Mythology
Print
James Reed Print Collection
lithograph
black and white
classics
Portfolio List Click a portfolio name to view all the objects in that portfolio
This object is a member of the following portfolios:

Your current search criteria is: Portfolio is "Germany" and [Objects]Display Artist is "Johann Michael Mettenleiter".