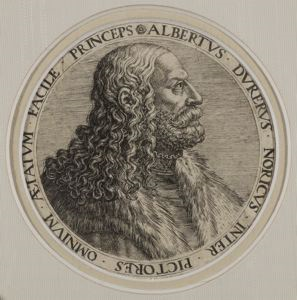 
The German painter, draughtsman, and printmaker Albrecht DÃ¼rer enjoyed extraordinary fame during his own lifetime. In addition to several self-portraits, he was the subject of numerous portraits by other artists. One of the earliest of these was a medal designed in 1520 by fellow Nuremberg native Hans Schwarz, which enjoyed great popularity and was reissued upon DÃ¼rerâs death in 1528. Danish engraver Melchior Lorch designed a print version of DÃ¼rerâs portrait around 1550, drawing perhaps on Schwarzâ medal as well as the artistâs own self-images. This engraving was likely designed after one of these earlier objects. In it, DÃ¼rer faces to the right, his characteristically long, curling hair flowing down over his shoulders. Bearded, he wears a fur-trimmed robe over a high-collared shirt, and looks firmly into the distance. Around him, a Latin inscription announces his primacy among artists: ALBERTUS DURERUS NORICUS INTER PICTORES OMNIUM AETATUM FACILE PRINCEPS (Albrecht DÃ¼rer of Nuremberg, easily the greatest among the painters of every age).

Male artists
prints
Pictorial works produced by transferring images by means of a matrix such as a plate, block, or screen, using any of various printing processes. When emphasizing the individual printed image, use "impressions." Avoid the controversial expression "original prints," except in reference to discussions of the expression's use. If prints are neither "reproductive prints" nor "popular prints," use the simple term "prints." With regard to photographs, prefer "photographic prints"; for types of reproductions of technical drawings and documents, see terms found under "reprographic copies."
public domain
Land owned and controlled by the state or federal government. Also, the status of publications, products, and processes that are not protected under patent or copyright.
black and white
Additional Images