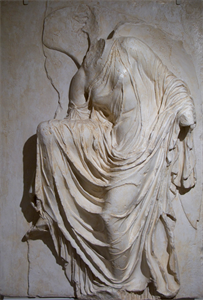 Nike Tying her Sandal, more familiarly known as the âSandalbinder,â is one of the best-loved sculptures from the Acropolis. Here Nike, or the personification of Victory, is shown balancing on her left foot so that she may raise her right foot to adjust her sandal. Though treating a disarmingly simple subject, the sculptorâs dramatic use of drapery â both on Nikeâs chiton, with its buttoned sleeves, and the mantle that crosses her right thigh before rising to cover her left shoulder â conveys a sense of impressive energy and monumental grandeur. Indeed, the voluminous fabric, under the artistâs skillful chisel, has assumed an architectural quality; one that seems to help Nike maintain her balance.

The sculpture represented by this cast was originally located on a parapet wall that surrounded the Temple of Athena Nike on three sides of the bastion just to the right of the Propylaia. As visitors in antiquity arrived at the steps to the Acropolis, they would have seen this Nike facing outward on the marble parapet, along with several other examples of Nike approaching a seated Athena.

Your current search criteria is: Portfolio is "Greece" and [Objects]Period is ".