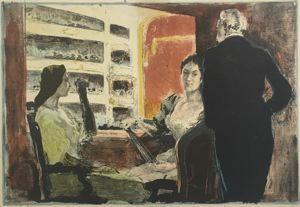 During Intermission, or The Opera Box, from the periodical "L'Artiste"


The fashionably-dressed people in this opera box are taking advantage of a break in the performance to socialize with friends, as the woman at the left lifts a pair of opera glasses to observe other members of the audience. In a theme common among late-19th-century artists, Lunois turns his attention to the spectators themselves, rather than to the entertainment that they have ostensibly come to see.

Male artists
prints
Pictorial works produced by transferring images by means of a matrix such as a plate, block, or screen, using any of various printing processes. When emphasizing the individual printed image, use "impressions." Avoid the controversial expression "original prints," except in reference to discussions of the expression's use. If prints are neither "reproductive prints" nor "popular prints," use the simple term "prints." With regard to photographs, prefer "photographic prints"; for types of reproductions of technical drawings and documents, see terms found under "reprographic copies."
public domain
Land owned and controlled by the state or federal government. Also, the status of publications, products, and processes that are not protected under patent or copyright.
Portfolio List