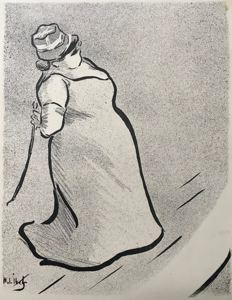 Jeanne Bloch, Study for Lithograph in the album "The CafÃ©-Concert"


The cafÃ©-concert, or cabaret, developed in Paris during the Second Empire, but came into its own in the last decades of the 19th century. Something of a cross between a bar and a concert hall, these venues featured nightly entertainments: popular songs, theatrical performances, and even acrobatic spectacles. Together with Henri de Toulouse-Lautrec, Ibels published a portfolio of 21 lithographs featuring notable cabaret performers, including actress Jeanne Bloch, the star of comic performances at La Scala and La Cigale.

Much aligned with Ibelsâ favored subject matter of choice, entertainers and working class Parisians, this lithograph depicts comic singer Jeanne Bloch as part of a portfolio of lithographs completed with his contemporary, Henri de Toulouse-Lautrec. Many avant-garde cafÃ©-concert performers incorporated humor into their acts, whether verbally satirical or through body language, as a departure from the rigid, censored performances that dominated traditional Parisian entertainment. Bloch, who Ibels has accurately shown as a well-endowed woman, fits the common appearance of comic cabaret singers. She was known to use her size for a humorous effect by taking smaller male partners when singing romantic duets. Despite the success of the establishments in which Bloch performed, entertainers like herself were frequently underpaid.