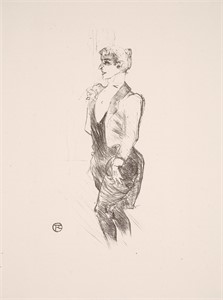 Toulouse-Lautrec had already drawn a portrait of English cabaret performer Mary Hamilton for the 1893 portfolio Le CafÃ©-Concert. Both it and this more detailed version depict her wearing menâs evening wear, which was then a marker of lesbian identity. Although male homosexual activity was still criminalized in France at this time, French vice squads appear to have ignored the Montmartre cafÃ©s such as Le Rat-Mort and La Souris that catered almost exclusively to a lesbian audience.

Lautrecâs detailed lithograph of English cabaret performer Mary Hamilton depicts her in her entertainment attire, including a menâs three-piece suit complete with a boutonniere. Cross-dressing was common among performers France during the 19th century. Music halls and cafÃ©s in particular were common places to spot an entertainer dressed in the attire of the opposite sex. While this style of dress was common for European entertainment, it was also a symbol of lesbian identity in France. Many of the female cabaret performers in France during this time were bisexual or lesbians, performing in queer-owned and frequented locations, particularly in the area of Montmartre. Unlike in other parts of Western Europe, France decriminalized sodomy after the French Revolution, so LGBT culture flourished in Paris. This allowed for performers like Mary Hamilton not only to perform but to live more freely despite the occasional raids of queer-run businesses. The name Mary Hamilton also belonged to a woman in the 18th century who was notorious for marrying a woman while dressed as a man, which may have been the origin of the cabaret performerâs stage name.

In this lithograph, drawn by famed nightlife artist Henri Toulouse-Lautrec, a cabaret performer, Mary Hamilton, wears a menâs suit jacket, a symbol of her lesbian identity in the Parisian entertainment industry. Although homosexuality and other acts of sodomy were illegal at the time this lithograph was created, laws against lesbianism were not as toughly enforced by the police and âpederasty patrols,â as sex between males. This allowed the lesbian subculture in Paris to flourish while much of the gay community was still reluctant to openly flaunt their sexuality. But, just as putting on a menâs jacket was a rejection of the dayâs social and gender norms, the drawing itself is a rejection of perfection held by academic artists from earlier in the century. Her form is chaotically scribbled, with limbs missing and undefined; and although her faceâfrighteningly depictedâlacks proper line definition, we can tell from the piece that Hamilton is on stage. The bottom half of her face and neck are solid white, while the top half, including her nose and above her eyes, are shaded. This is meant to resemble the look of performers in the cast of stage lights which came up from the floor.


Keywords Click a term to view the records with the same keyword
black and white
LGBTQ+
lesbians
cabaret
performers
Portfolio List Click a portfolio name to view all the objects in that portfolio
This object is a member of the following portfolios:

Your current search criteria is: Portfolio is "Prints" and [Objects]Country is "France" and [Objects]Display Artist is "Henri de Toulouse-Lautrec".